I have always assumed that advertising would have a long and positive association with art, but until recently I never really thought about this beyond the natural assumption that ‘creative types’ must be artists by default.  I have, after all, seen some beautifully drawn/painted ‘scamps’ in my time as a client-side marketer.

I spent time in Sheffield recently at the rather quaint Graves Art Gallery.  A council run art gallery with strange opening times and those wonderful polished wooden floors you only get in council run art galleries and museums. Parquet flooring supreme!  I am only gently teasing, it, like Sheffield as a city, often surprises and the recent Leonard Beaumont exhibition was quite engrossing.

What has this got to do with advertising and marketing I hear you ask?  Well my favourite book of 2012 (apart from a rather brilliant read on my favourite building – the concrete UEA in Norwich) was a rather scholarly read on the history of Sainsbury’s packaging (Own Label: Sainsbury’s Design Studio by Trunk & King).  The connection is that Leonard Beaumont, apart from being a fine print maker, was responsible for a large part of Sainsbury’s enduring brand identity.

Beaumont was born in Sheffield in 1891 so he witnessed a sea change in advertising and design in his long life, he passed away in 1986.  At 16 he had his first job in art/advertising – working in the art department at The Sheffield Daily Telegraph.  He served in WW1 but by the 1920s and through the 1930s he began to create some etchings and dry points that attracted the attention of the Royal Academy.  It is his Linocuts I really like from the same period.  They show a close affinity with Vorticism and the quality of the linocuts on display were exceptional, sharp and clean with punches of vibrant colour.  Unexpectedly, really interesting. 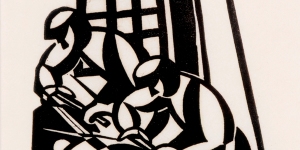 I love finding new work or new artists like this – I spent nearly two hours in what was a shortish exhibition.  A great show. 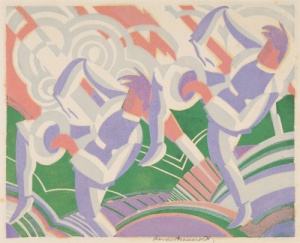 To hell with tin hats (1929) Linocut by LeonardBeaumont

His work for Sainsbury’s from the 1950s and beyond was part of what must have been a brilliant era for packaging – where cardboard dominated and required design to work hard compared today’s modern world of ‘see through’ packaging.  His use of a single clean font – Albertus – hung everything together alongside muted colours and simple design. Quite beautiful work in my opinion. 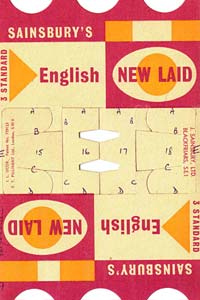 It prompted me to think about the work of other artists, perhaps better known, in marketing/advertising.  The list below was actually quite hard to come up with (let me know if I have missed any obvious ones !) …

It’s a shorter list than I expected.  In fact the most obvious current correlation of artists to advertising is diametrically opposed to their involvement as positive creators:

Banksy has been vocal in his opposition to the whole concept of advertising, and vocal means visual art in his case. 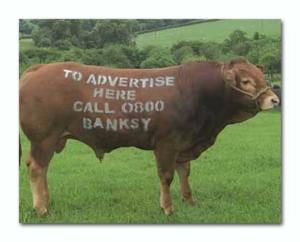 Fischelli and Weiss briefly threatened to sue Honda for plagiarism over the ‘Cog’ advert, which may have been inspired by their installation “The ways things go”.  No action was ever taken.

Andy Warhol using advertising as art. Brillo, Campbell’s Soup etc. to debunk the myth of creativity – one of many theories I would point out!

Jake and Dinos Chapman’s long-standing obsession with ridiculing capitalism, and their continued use of MacDonald’s and other brands to illustrate this. 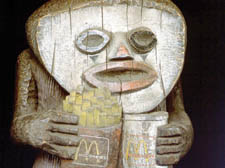 So while I can easily find lots of examples of Artists poking hard at advertising with a stick at the moment, this represents a swing from the 50s, 60s and 70s when the opposite was probably more common.  An interesting societal and cultural shift I think.  I will leave the last word to Banksy … 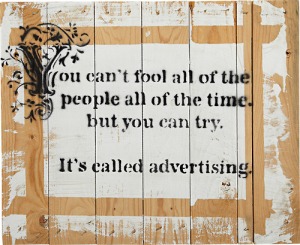